I've been here for a month and a half, busy with everything related to moving and starting a new job, but have found time to begin enjoying the new place on this rock we call home. Slammed right in the middle of this sleep-deprived period, the yearly blessing from above, or I guess blessings from past emperors called Golden Week drifted in and out all too fast. There's such a buildup to Golden Week and once it finally comes, you don't want to waste the holidays so you jam your schedule with unreasonable amounts of plans and promises, and then it's gone.

But I can understand why it's such a monumental holiday here. Not only is it rare to get such a long string of holidays (this year it was 5 days) in Japan, the timing comes as a blessing for more than myself. In Japan, everything happens in April. People move all over the country, students start their school year, and work officially starts for the new drones. This cascades into madness when everyone wants to set up a new internet connection at home, and even furniture delivery companies become backlogged. Golden Week happens exactly a month after this giving everyone a chance to breathe and stretch out their legs.

First on my list has to be a place I stumbled upon when looking for something to eat with a friend one rainy evening. We were in Mizonokuchi and after walking around and seeing everything that was near the station (really, there's not that much), we decided to get some food. The real estate company I used to find my place is at this station as well, so it wasn't my first time there. I loosely remembered an alleyway full of standing bars and izakayas the last time I was there so I figured we should head that way.

Since the area around the station is bisected by the rail line, crossing between the two halves of Mizonokuchi is a little challenging. Coming out of the wrong exit, we could see the alleyway but couldn't get to it. Returning back to the station, we came across a narrow street housing three restaurants (ramen, yakiniku, and yakitori) and decided to just pick one and eat there. Without looking at the menus, we decided to go to the yakitori restaurant. 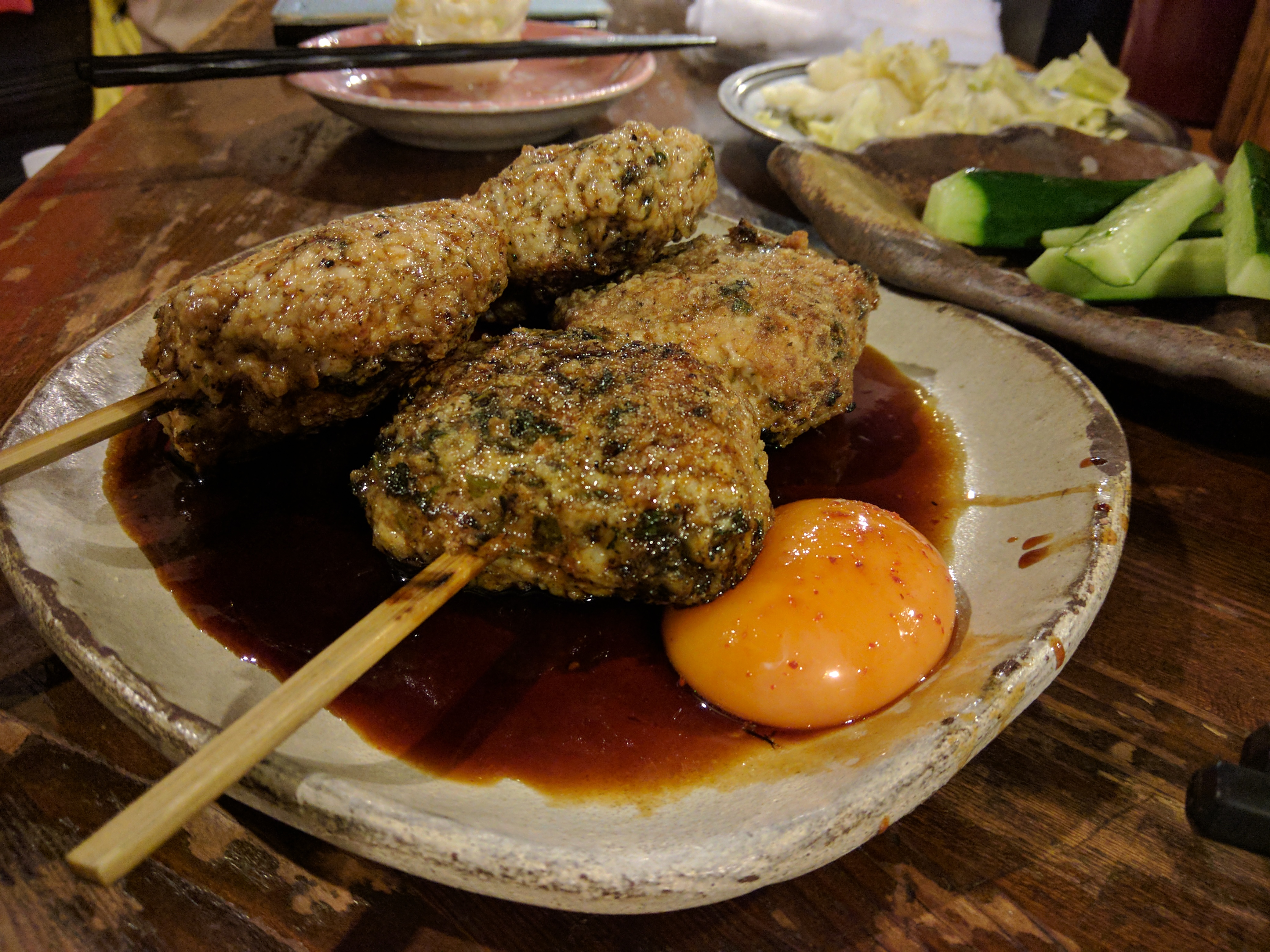 炭火鶏焼屋 たまい is a small restaurant with about 10 counter seats, some counter seating outside, and about 3 tables on its second floor. It's usually staffed by 3 super-efficient people, cooking, pouring drinks, taking orders and serving, and cleaning up. I've never seen them crack a smile and they often don't stop doing what they're doing to take orders (they'll stay focused on their task at hand and just listen and call back what you've ordered). The photo above is one of their signature dishes (tsukune) which is made from ground chicken mixed with some herbs and spices, grilled over charcoal and served in sauce with a raw egg yolk. Unusually large, one order will leave your stomach half-full, but with room still for beer and other goodies. We ate until we were stuffed, had about 2 drinks each, and walked out paying just over 3,000 yen. 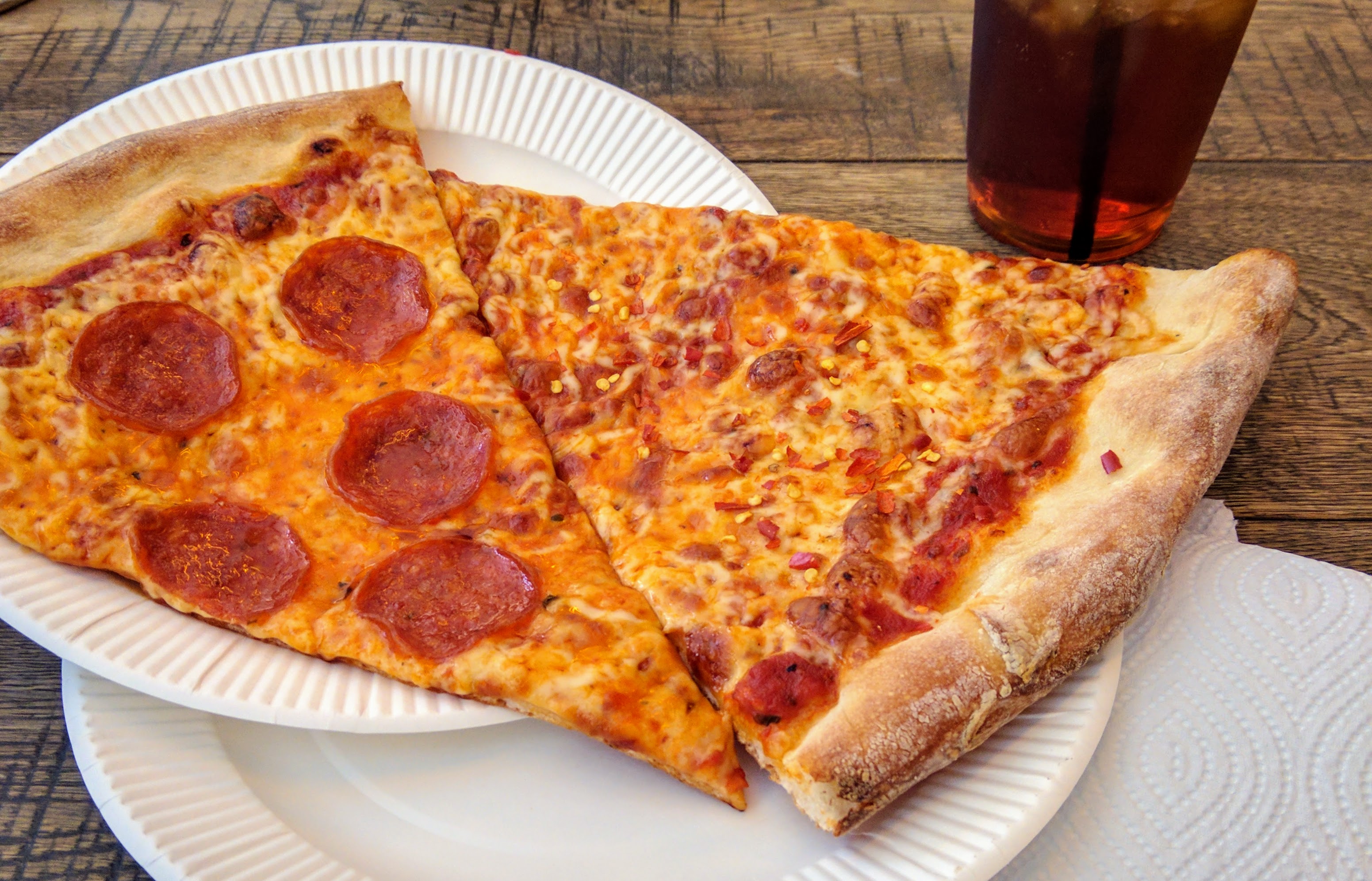 You can find huge, New York style slices at Pizza Slice. Located about 15 minutes away from my office in Shibuya, going here during lunch can be a bit of a stretch, but for 1,000 yen you get two huge slices and a drink. One of the slices is always cheese, but the for the other, you can pick among about 8 different varieties. It's a little hard to find this place since it's in a kind of under-the-tracks location, but the interior is always bright and a very open space. If you've got a cat's tongue, go here for a nice mouth burning. 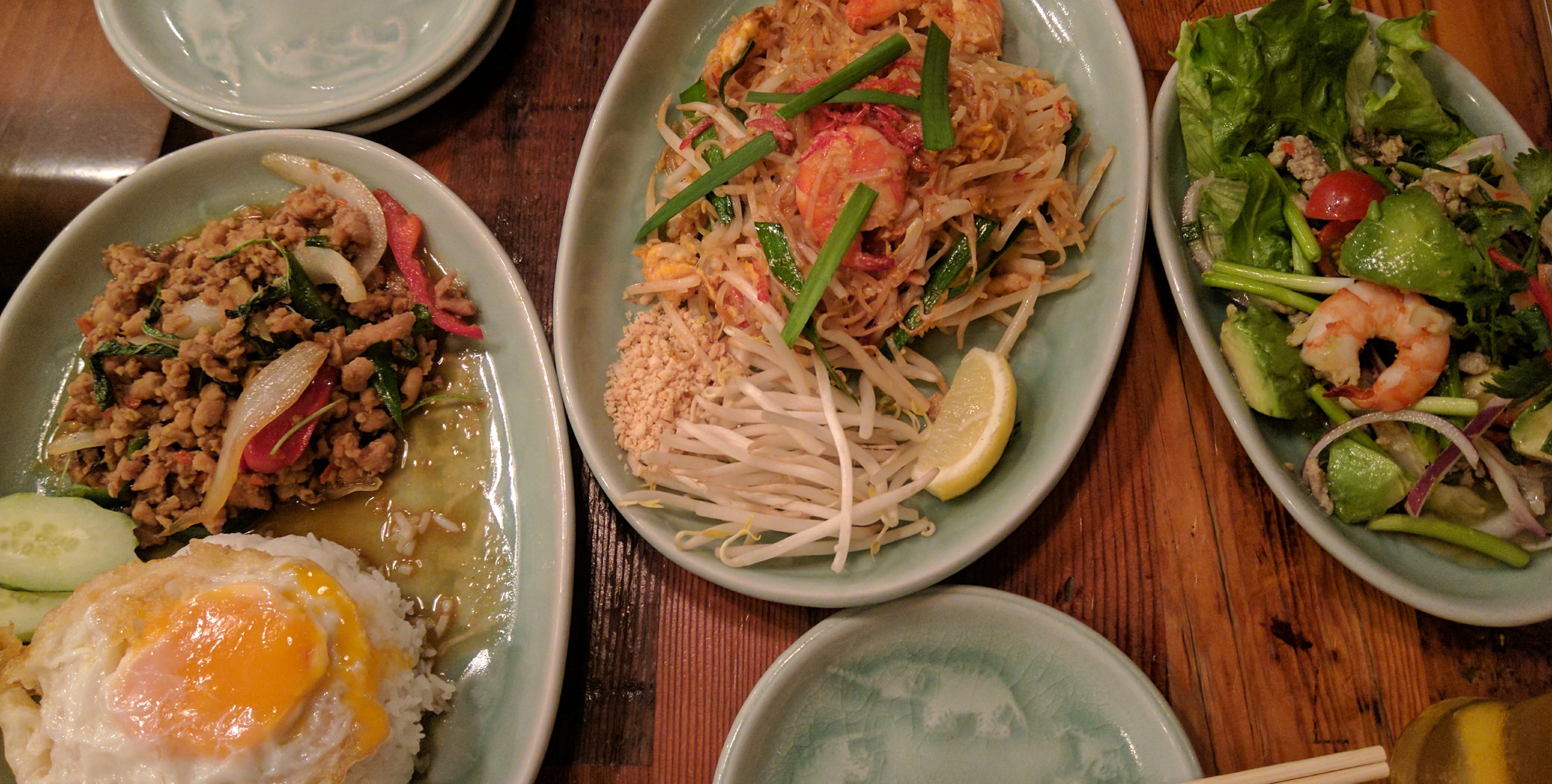 Spicy food is a little hard to come by in Japan, so when I feel the need to sweat while I eat, I head over to Sathaban Wijai Ahan Thai. This place is tiny and has a capacity of just under 20 people. If you're heading here for dinner, you'd better make a reservation. I've never been here for lunch, but I'd expect it to be pretty busy as well (probably not accepting reservations for lunch). You might not believe it, but in the photo above, the salad was the most spicy. Paired with a bottle of Singha or Chang Thai food can never be too spicy. I've tried all of the favourites (gapao, pad thai, green curry) and haven't been disappointed, but will need to go back a few more times to get through the rest of the menu.

Although life now consists mainly of working and eating, there's still some time for relaxing. I haven't gone through too much of Tokyo yet, but rather I've stayed around my station and the stations adjacent when I find some free time. 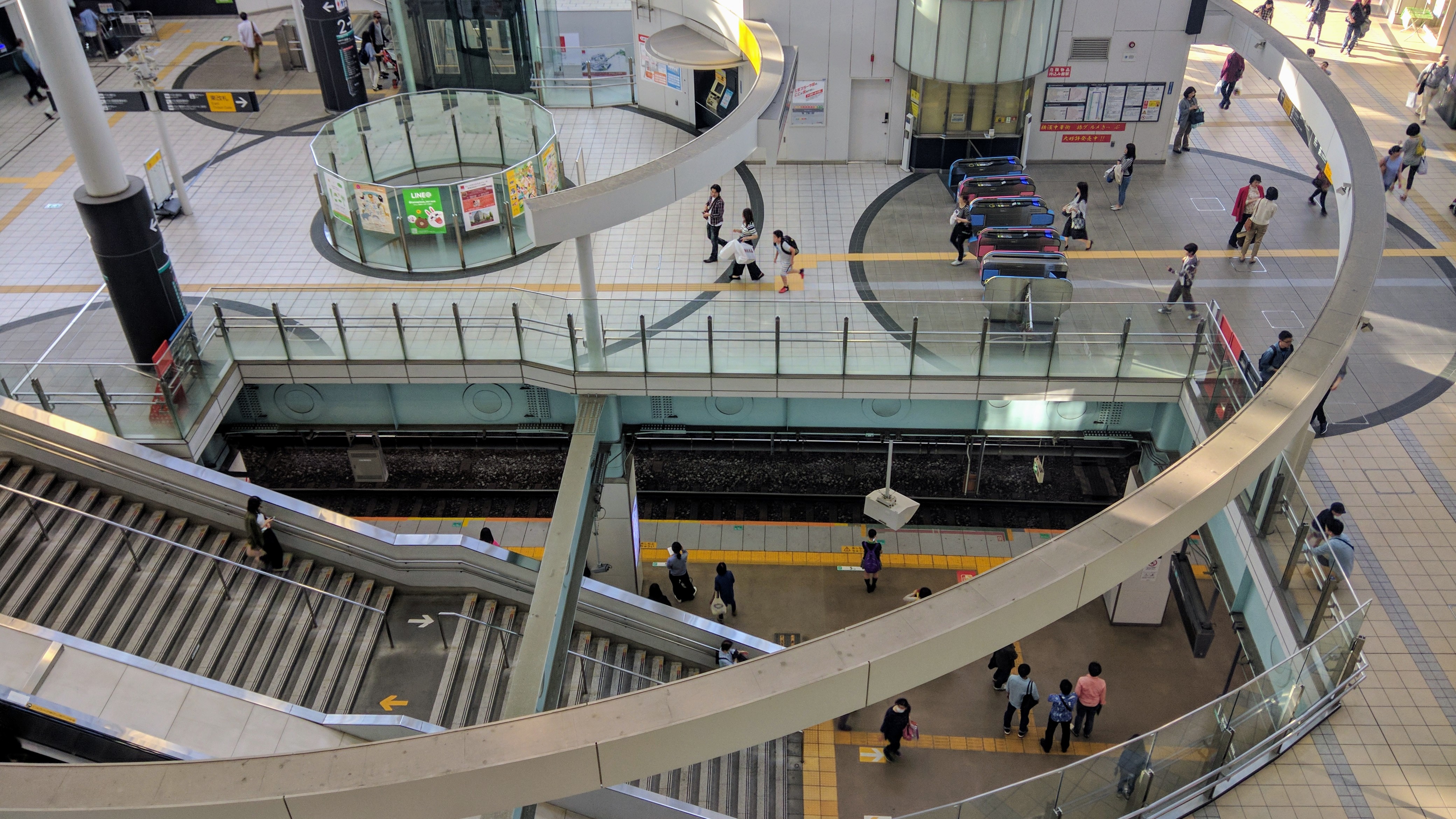 One station over at Tama-Plaza, there's a shopping center that has just about everything needed. It's also where I was finally able to buy curtains for my home. There's a Starbucks here, and a couple of restaurants, but it's nowhere as busy as some other nearby stations. After walking out of the station, there's not much of anything, so coming here for shopping and relaxing at Starbucks is all I can recommend. 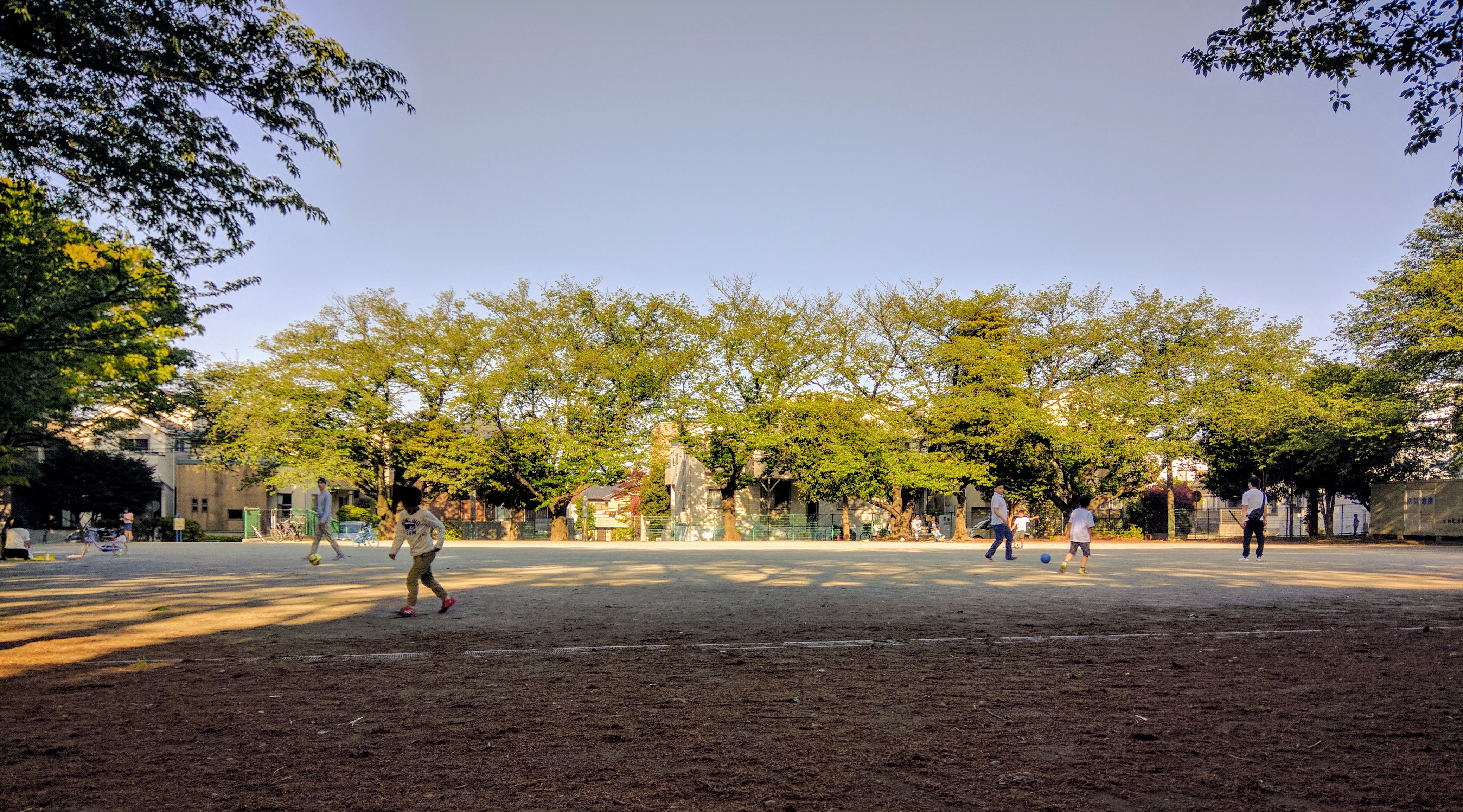 Located just a minute or two from home, Kodai Park is my go-to place for picnics or just relaxing under the shade of trees while getting some fresh air. Every tree you see in the picture above transforms into a spectacular pinkish-white every spring when the Sakura bloom. Finding this much flatness is kind of rare in my neighbourhood, kids and adults alike come to play soccer and ride their bikes here. There's a convenience store and a drug store nearby where you can buy cold drinks and snacks, although if you're afraid of bugs, don't sit too close to the grass. 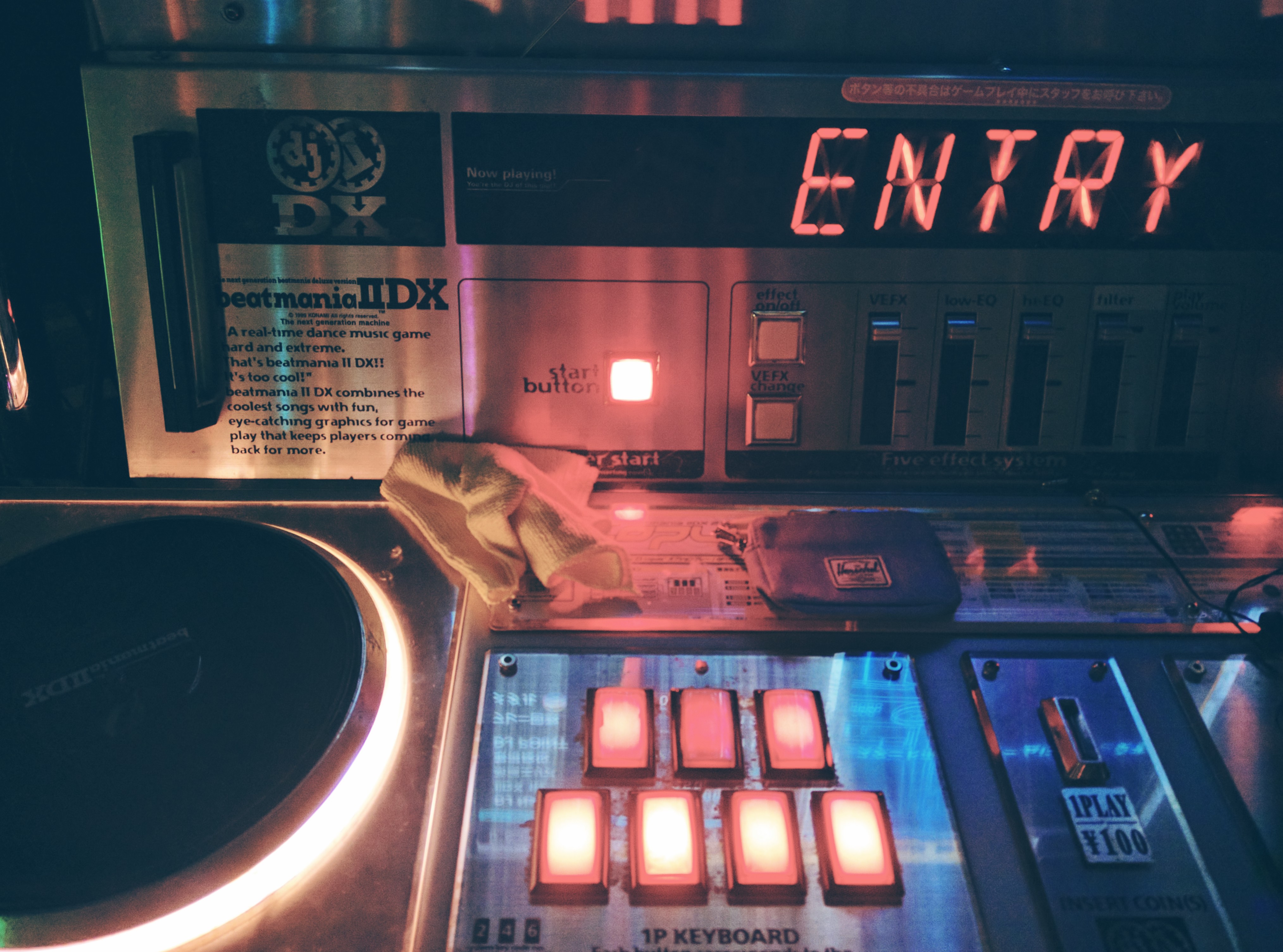 And of course, there's still time for going to the arcade. Sometimes during break, I'll run to the closest game center in Shibuya for a game of Beatmania. The selection is surprisingly limited here, and I felt like there were more game centers in Osaka. I haven't been able to visit a Round1 around here yet, but there doesn't seem to be any in the heart of Tokyo anyway.

That's pretty much it for a month and a half here. Time is starting to feel like a luxury again, so I often try not to waste it when I come across some. There are still many places I want to go, and some projects I want to finish (I still have to paint my other stool!), but I'm quite happy here in my little corner of Kantō.

Preface I didn't know what to title this post, but I decided not to sugar-coat it and just write what I think is currently going on. I'm going to be 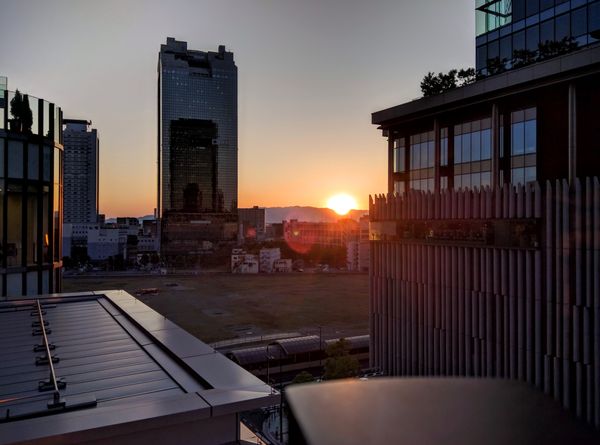 It's been half a year since I've last posted here and a lot has changed. The biggest change has been leaving Osaka. No, I didn't give up and leave Japan,